A word from the General Manager

De great wealth of agricultural production, and especially the great availability of a wide variety of fruit in all seasons, agricultural production for which significant post-harvest losses have been observed due to the absence of an industrial infrastructure for conservation and processing, the national fruit juice market remains largely dominated by “artificial” juices, the main raw material of which is imported. The agro-food sector being considered as an important lever for an inclusive economic development, we created the company ALPHA as much to seize the formidable business opportunity related to the importance of the national fruit production and the absence of infrastructure industrial transformation of these productions into consumer products, only to improve the consumption rate of healthy and natural “hygienic” drinks at national level from national raw materials. The industrial and commercial project fits perfectly into government policies for the agricultural sector and for the health sector. 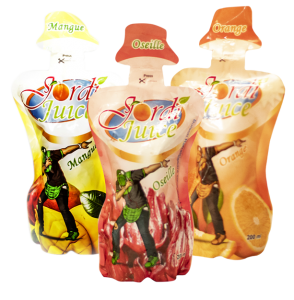 It was also found that natural beverages with high nutritional potential were at prices accessible only to the upper segment of the population, the lower strata of the population being satisfied with so-called “carbonated” drinks, which further deepened the inequalities in the society.

The raison d’être of ALPHA is to democratize the consumption of fruit juices with high nutritional value, capitalizing on the great nutritional potential of the varieties of fruit available on the national territory, with a view to introducing into the eating habits of a greater part of the population the consumption of natural fruits with high nutritional value. ALPHA thus selects the varieties of fruit, on the basis of their nutritive potential and the properties which are recognized to them as favourable to health, and develops industrial processes for their transformation into 100% natural fruit juice.

ALPHA is implementing a commercial offer, whose great flexibility makes the consumption of natural fruit juice affordable for all budgets, so that access to such an essential product is no longer elitist.

ALPHA specializes in the development, development, production and processing of 100% natural fruit juices from a raw material from 100% organic farming. ALPHA is vertically integrated with its own farms, its production units, and its transport and distribution logistics. ALPHA also oversees a network of producers in the production of 100% organic fruit as suppliers. ALPHA therefore places 100% organic and fair trade farming at the heart of its supply of raw materials.

The future of the agrifood sector, more specifically of the still embryonic fruit and vegetable branch, is bright in economic and also in social terms, and the company ALPHA aims to position itself as a locomotive of the industrial transformation segment of fruit which maintains the original nutritional value of the raw materials.